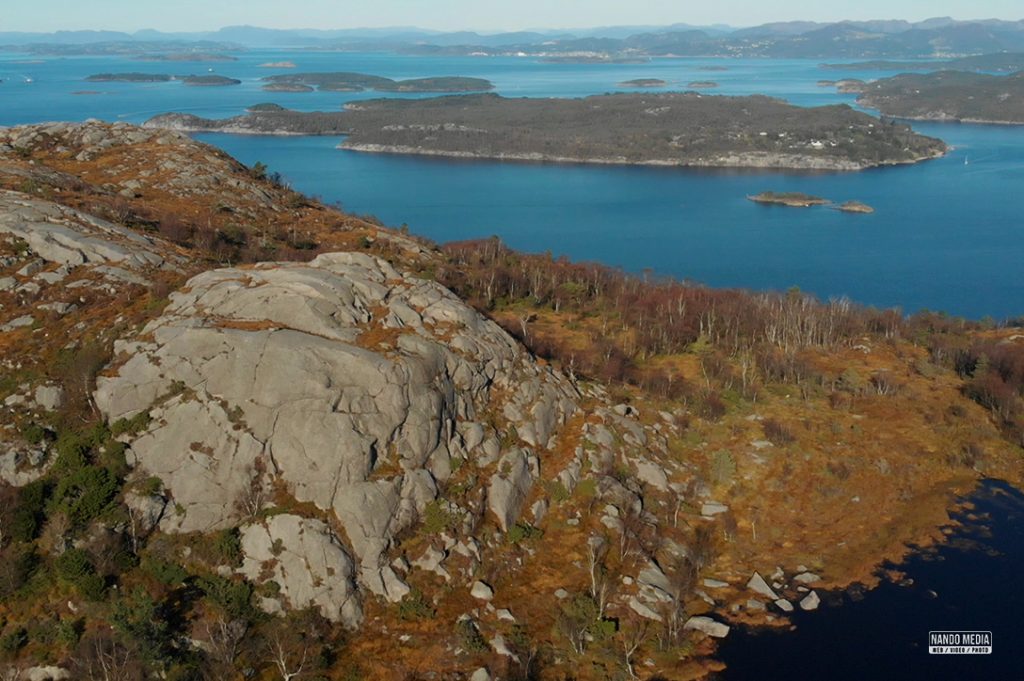 I thought it would be nice to take you to an inspection abroad, to let you know what preparations we make and how the journey itself takes place. For example, we have been in contact with our foreign associations about the inspections this season since the spring. Gerrit Stelwagen also maintains many contacts with organizations abroad. The inspection in Norway will take place at two locations, near Oslo and Stavanger. Marjolein de Jong-Betten and myself (Geertje van de Veen) will judge the horses here, Maarten Schraa for the presentation of the horses and Nando Dirksen will record this at the request of the Norwegians.

It is now Friday afternoon and I will be picked up by Maarten, Nando and Marjolein and then we will head for Schiphol. Maarten has brought ribbons and jury papers from the secretary. Ilse Schraa takes care of this and everything is well organized again. Everything is fitted within our hand luggage. It’s pretty cold in Norway but luckily it is dry, because the second inspection will take place outside. Marjolein and I wonder what looks somewhat representative when you have to judge, outside in a cold and rainy environment. Maybe a hat with ear muffs? We are now at Schiphol, nicely on time and as always at airports… waiting. For Marjolein this is the first time flight ever, we show her the nice things within the airport and drink a cup of coffee.

21:00, landed in Oslo. Had a great flight, though Marjolein had huge trouble with her ears, always annoying. Anyway, Jeanette Lid was ready to pick us up in Oslo and we went straight to the inspection location (Harkerud Hestesportsenter) where we already started collecting DNA from the participating horses and foals. At dark it already seemed like a nice accommodation but it was cold, we are not quite used to that in the Netherlands this early in the season! After collecting the hair samples we were taken to our hotel where we drank a drink and went to our rooms.

The next morning we were pleasantly surprised by the enormous and extensive breakfast in the hotel! We ate well, because you never know when you will eat something again during the day of inspection.  After we were picked up, Maarten was wearing his presentation clothes, and Nando was ready with the camera, we started with the judging the filly’s.

The racetypical and well-trotting Jazmin van Strandi (Albert BP 15 x Tietse 428) from Bjorn Engen immediately impressed by her beautiful appearance and proud carriage. She received 44 points and also won the day championship later at this location. After this, three more stallion foals were shown and Joey van MK (Albert BP 15 x Bontfire XX 06) was in the lead with 40 points. This high-legged foal by Majken Karlsen was very well developed and moved more than sufficiently. 1 yearling stallion was registered, Inferno FA (Albert BP 15 x Sonyo) by Lillian Muller and he was presented in very good condition. We are curious how this young stallion will develop because now he received a nice first premium with 43 points.

Among the three-year-old mare’s, five horses were on the list, but unfortunately one fell off after the part on the street due to an abnormal way of trotting. Always unfortunate when you have to send a horse away but these are the rules, the owner understood this decision. The beautiful and modernly built Diana van Soma (Bontfire XX 06 x Tsjerk 328) by Majken Solberg finished here with 43.5 points. She had three good basic gaits and was technically well put together, although she lacked some muscularity. This was not so strange, she was lactating. Later she even became elite by achieving the IBOP and scoring on her movement in such a way that she managed to upgrade. Baldwin Ster 51 was the master of his younger sex due to his impressive appearance and top condition. He was allowed to be stronger in the movement but he got an 8.5 on racial type! Later that afternoon he received a positive result for his IBOP test. His younger classmate Hannibal van Vale was not quite ready this day to obtain a breeding license, but we hope that he will develop in the future. kan

At this point of writing we are waiting in the canteen for our transport to the airport. We are provided with pizza and especially Maarten and Nando appreciated this very much! Traveling is always accompanied by waiting and then it is nice when you can spend your time useful. Tonight we fly to the west coast to go to our hotel from the airport in Stavanger. Once we arrived in Stavanger, Tonje Solberg picked us up and brought us to the hotel. Of course we walked around the coastal town for the night and took a little nightcap at a local pub. Unbelievable how quiet it is here on a Saturday evening!

Sunday, October 6, 10:00, start of the inspection at the location of Tonje. We are looking forward to it and we are lucky; a lot of rain has fallen here lately and now it is dry and the sun is shining! Twelve horses appear in the ring today and we start with the foals as always. Six mare foals show themselves above average. The easily trotting Jippi av Lykkeli (Elvis from Soma star 56 x Fetse 349) from Ragnhild Johannessen is in the lead. Among the stallion foals, Jackpot van Soma (Edwin BP 35 x Big Ben a Killa) was the best. This foal from our hostess achieved a score of 42 points.

The mare which is declared star with a first premium is Gloria van Soma (Elvis van Soma Ster 56 x Rypke 321). Owners of this beautiful colorful baroque mare are Hanne Kjersti and Albretsen Granbakken. Her way of walking stood out positively, her trot was correct, only we like to see more ‘jump’ in her canter. There was a stallion registered for the inspection. This well-developed (1.60m) young stallion from 2017, Hadwin van Soma (Elvis van Soma Ster 56 x Tsjerk 328) from Tonje Solberg appeared in sparkling health and is already well in line with a two-year-old horse. He showed himself very well and trotted the pasture in a gliding way. This friendly colorful stallion received no less than a 7 on his list of grades and we hope that he will grow into a beautiful father animal. From now on he will go through life as Hendrikus BP52.

After this success there was another participant for the IBOP test. The stallion Fernando XX 19, also from Tonje Solberg. He is only four years old but already showed as a well-trained horse. The stallion received more than sufficient marks and this resulted in a final total of 67 points; so successful!

The mare foal Jippi av Lykkeli was named day champion at this location. All participants received many extra prizes on behalf of the Norwegian Barock Pinto association, always a nice token of appreciation towards the owners! It were two nice inspections with fine animals. Nice to see that the owners who are attending the inspection are just very happy with their horse without having economic interests in mind.

After the inspection there was still time to make some nice shots of the area. We were taken to a nearby mountain and here we could enjoy a beautiful view after a long walk. We almost had to drag Nando back, because in his opinion he was not nearly finished filming! But yes, planes just don’t wait for over-enthusiastic camera men! Our flight to Amsterdam was through a transfer in Copenhagen. Once in Amsterdam we had to drive back to the north of the country and we were back in our own bed after midnight. It was a prosperous and pleasant weekend with nice people, nice animals and lots of traveling! 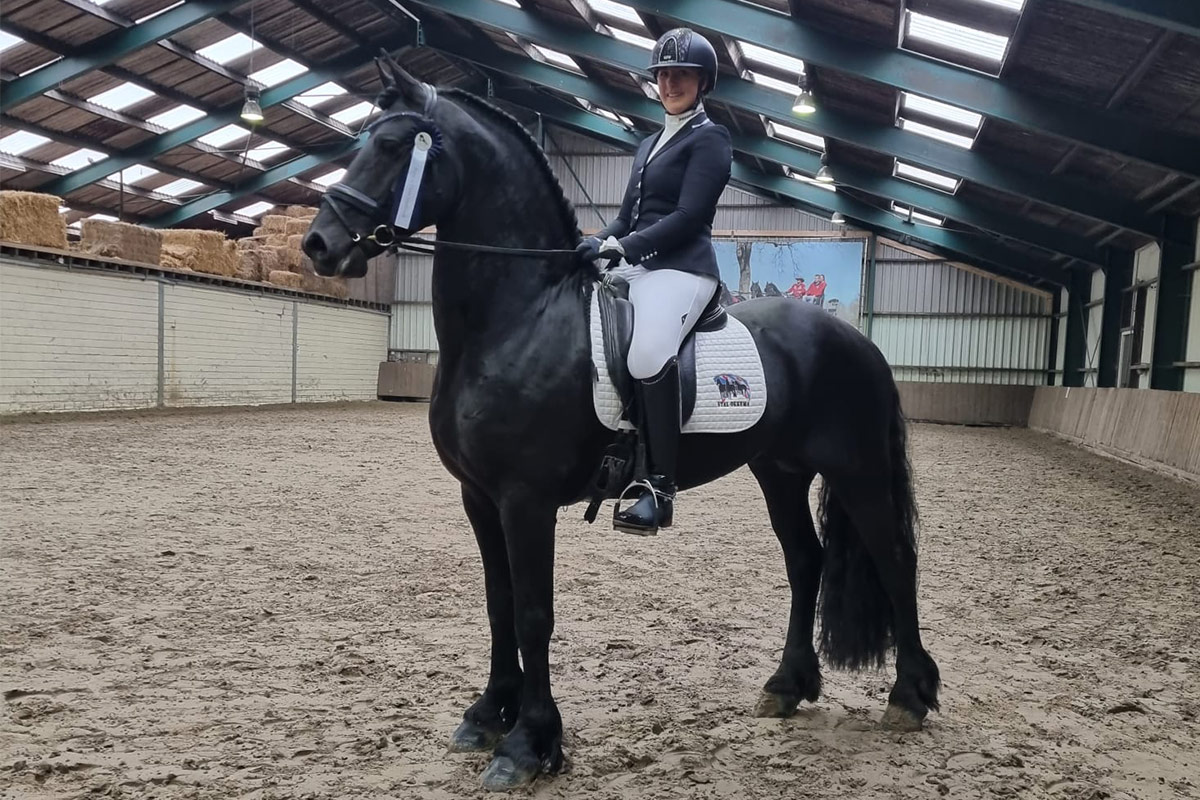 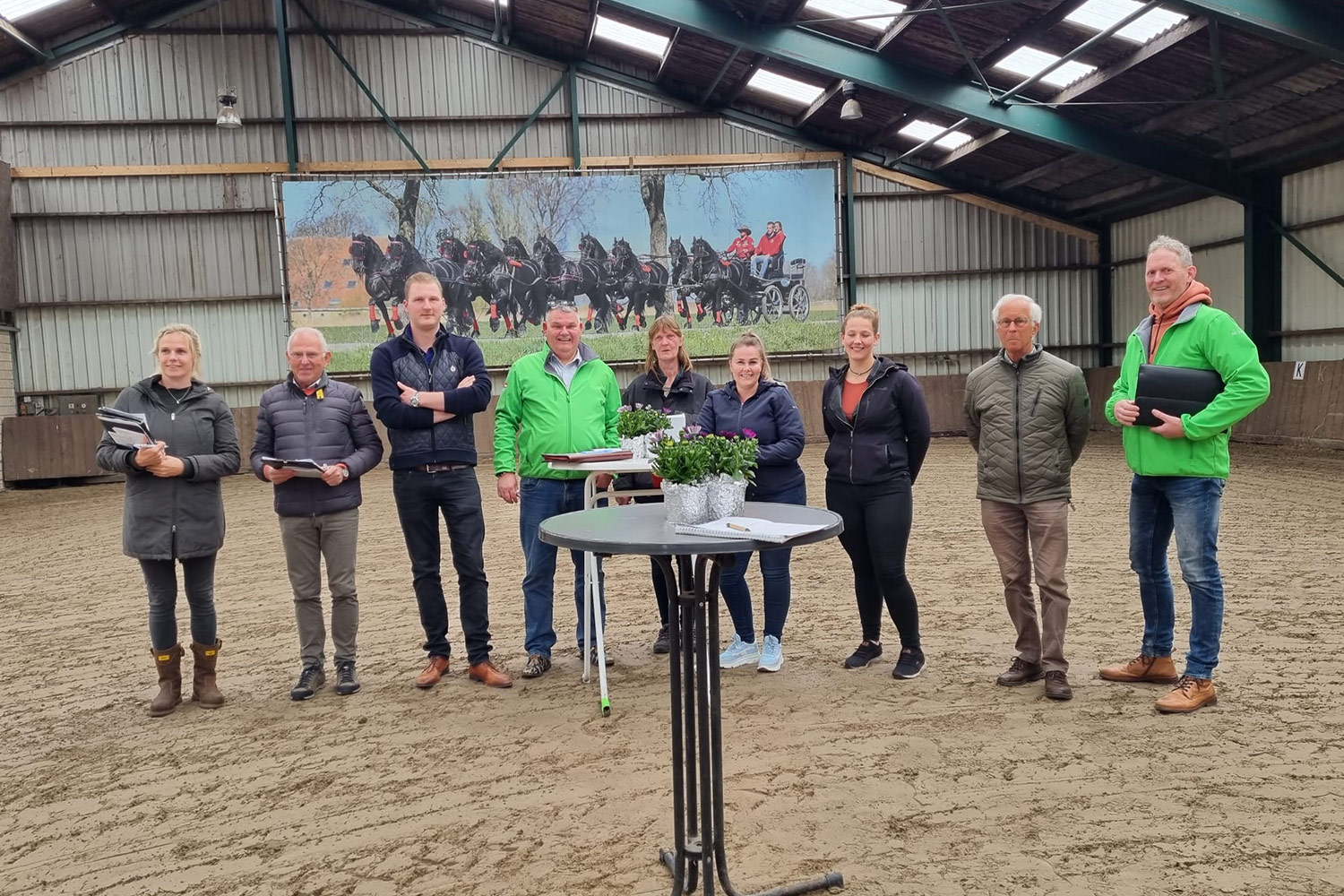 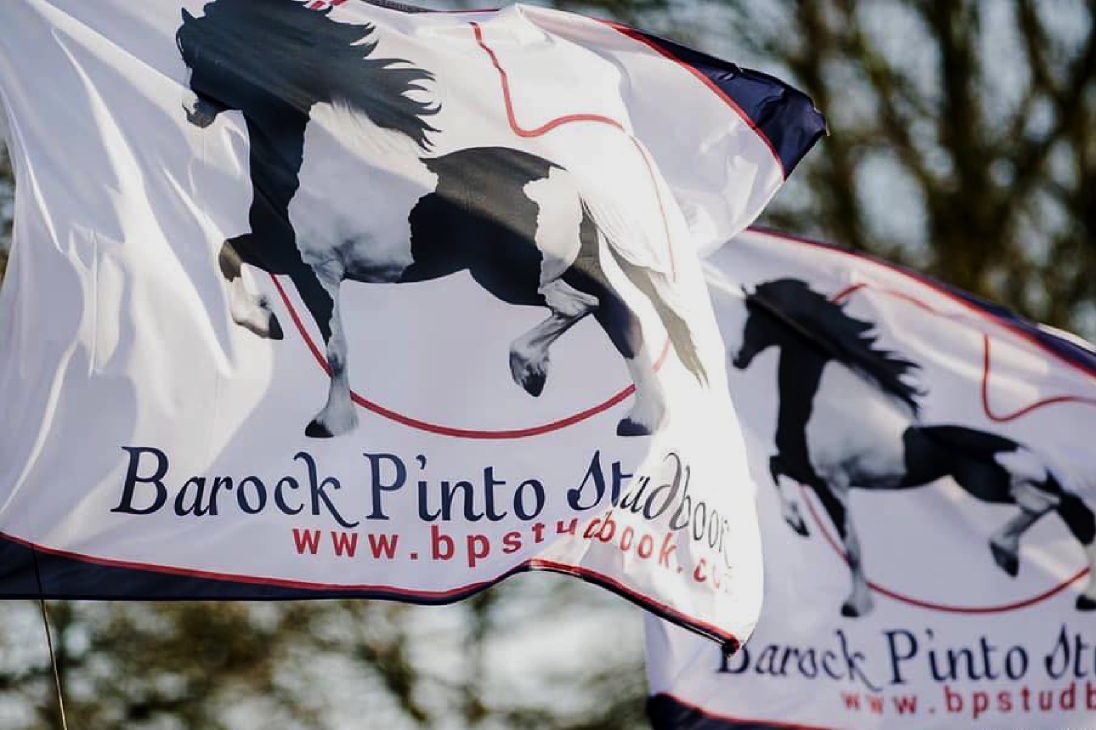 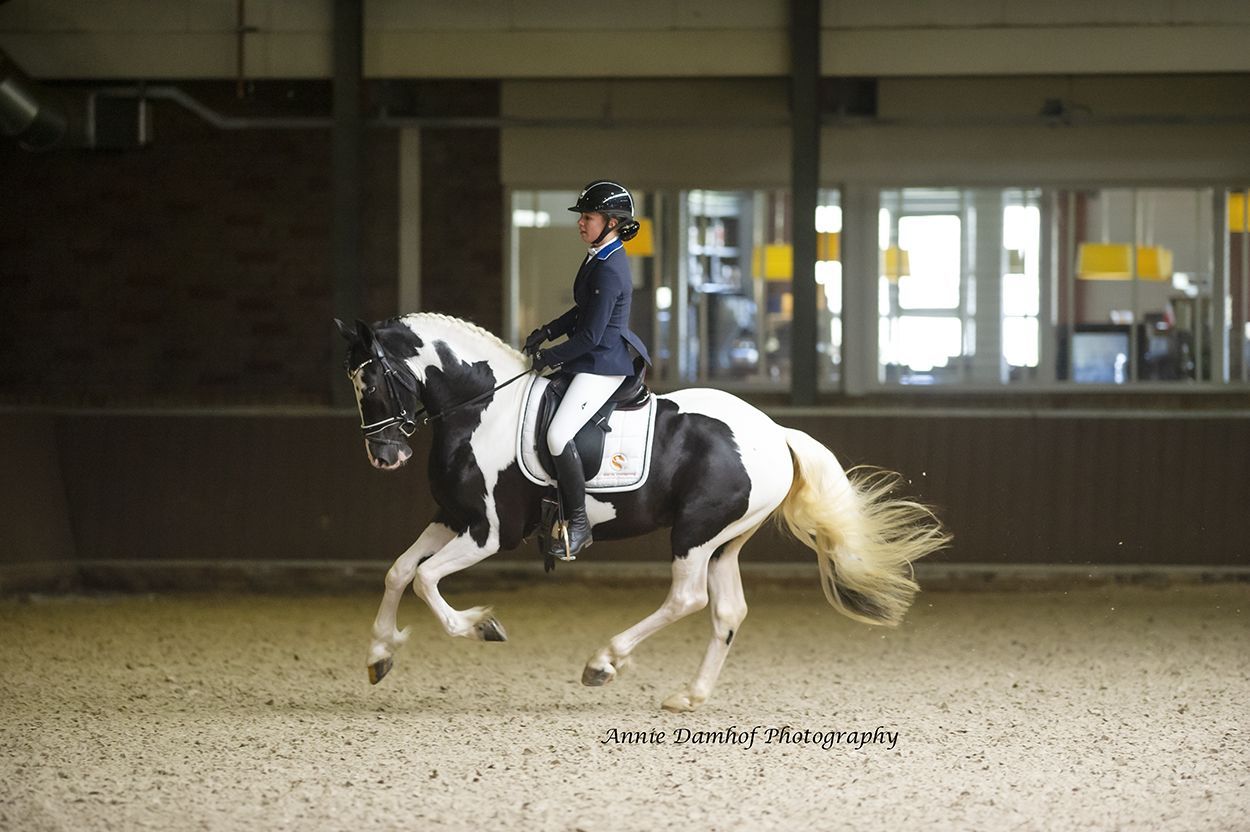